New station “has changed my life”

“This opportunity has changed my life.”

That’s a big claim for anyone to make on their first day of a new job. But for Tony Sebastiao, 51, it’s the truth. Last year Tony was homeless, living on the streets and struggling to survive.

But now he has a job, a sense of purpose, and hope for his future, after being recruited to help build London’s newest railway station at Brent Cross West, part of the Council’s ambitious Brent Cross Cricklewood regeneration programme. And as he has lived in Barnet since he first came to London, he is proud to be contributing to his community’s future.

His story highlights the commitment the programme has to leaving a positive legacy for the community, as it creates 7,500 new homes, with new green spaces and leisure facilities. And as part of our commitment to the local community, over 20% of the construction team are residents from Barnet or the neighbouring Brent and Camden boroughs.

Tony said: “It’s all thanks to the Brent Cross Cricklewood regeneration programme, VolkerFitzpatrick, and Barnet Council. They’ve saved me from myself and from my situation.

“I was at a point where I was wondering how I could go on. Now I am happy, and I meditate every day. It’s like being let off a £1 million debt.” 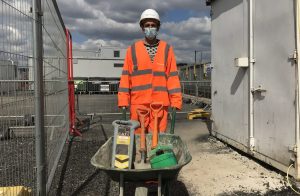 Tony’s life takes in multiple tragedies, which led to him ending up homeless in London. Although born in the Azores islands in the Atlantic Ocean, Tony moved to Canada with his parents at just four years old. He grew up in Toronto and considered himself Canadian. But a series of personal set-backs sent his life on a downward spiral.

Eventually he ended up being deported from Canada and found himself back in Portugal – but as he says: “I didn’t know anybody there. Nobody at all. The government tried to help, but that meant a single room with cockroaches and no windows – a cupboard, basically.

“Because I speak English, and had worked on building sites in Canada, they said London was the best place for me to go.

“As soon as I left school at age 16 my dad had taken me to work. Dad was a torch man on demolition sites and taught me how to cut steel. It was a dangerous job, although it’s a lot safer nowadays.”

Tony arrived in Barnet in February 2008, and initially had success working on building sites before the financial crisis later that year left him out of work and homeless. Over the next 12 years he managed to find help from a mixture of charities and medical bodies, but his life began to turn around when he was housed by Barnet Homeless Action in 2020. 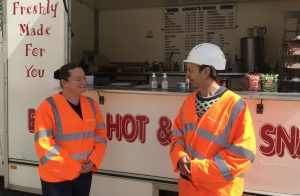 Tony said: “Through her I met VolkerFitzpatrick’s Workplace Manager Calvin Howe and Works Manager Dave Goodey. They helped me to get ID and UK settlement papers.

“Ever since they’ve been helping me it’s been like I’ve got a new life. I feel 20 years younger.”

Tony began working as a labourer in April and is already a popular member of the team. He is also having a bespoke training programme created for him to ensure that he can continue to support himself in the future.

Dave Goodey said: “When I met Tony I saw the type of man he is and that he just needed a chance. He’s genuine, he’s honest, and he’s had some bad luck.

“We did work behind the scenes to help him sort his paperwork so that he could get employment. That’s the easiest bit though; now the hard work is up to him.”

Dave added: “This is all part of what the project is about. We can’t help everybody, but we can all help somebody, and for us Tony was that somebody. We try to be one family here who all support each other.

“We all like Tony, and I hope that he is part of the legacy of the Brent Cross Cricklewood regeneration programme.”

If you are interested in finding out more about vacancies with VolkerFitzpatrick, visit https://www.volkerfitzpatrick.co.uk/en/careers

For information on apprenticeships with Barnet Council email skills@barnet.gov.uk

And for information on vacancies on Brent Cross Town email community@brentcrosstown.co.uk